Some pictures from the 2018 cohort.

A short video on Desi Kushti Mud Wrestling by the 2018 BULPIP-AIPS cohort
Watch our students share their thoughts and reactions after an incredible traditional wrestling demonstration. 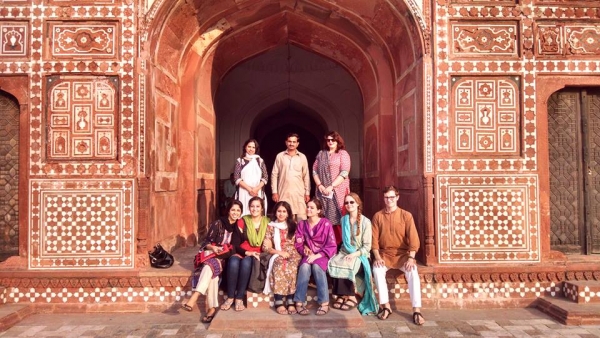 It isn’t easy for an American to travel to and spend time in Pakistan these days. And given Western media coverage of the region, not many people prioritize it as a destination. Despite the obstacles and the common misconceptions of the country, South Asia MAIS candidate Kelsey Utne was intent on getting there anyway. A student of Hindi and Urdu, she knew the value of immersion in developing her language skills. Previously she had lived and studied in India, but felt that her experience and understanding of South Asia was incomplete without visiting Pakistan.

Luckily, her first year at UW was also the first call for applicants for the Berkeley-Urdu Language Program in Pakistan (BULPIP) program in over ten years. Administered jointly with the American Institute of Pakistan Studies (AIPS), this program had been closed due to post-9/11 security concerns. As the political situation has stabilized, the program has reopened and seeks to give American students the opportunity to study Urdu in Lahore, Pakistan. After applying last winter, she was awarded a fellowship to study on the campus of the Lahore University of Management Sciences (LUMS) from August until December in the intensive Urdu language program. 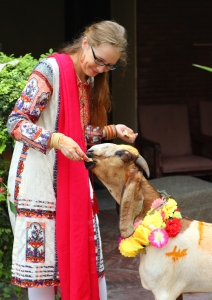 “Living in Lahore was an incredible opportunity,” Utne says. Though classwork dominated much of her time, she and her cohort also climbed Mughal forts, visited Sufi shrines, and celebrated Eid. “My favorite classes were on current events, because it helped me to better understand the city and country I was living in. We read local newspapers and almost every week we each had to present on a current issue or news story. And there’s a lot going on in Pakistan right now, so these classes also gave us space to ask for background information and clarification about ongoing issues.”

One of her most memorable experiences was celebrating Eid al-Adha, or Greater Eid—a Muslim festival which celebrates Abraham’s willingness to sacrifice his son Ishmael. “The night before it we went to the market to have mehndi put on our hands. It reminded me a little bit of the US winter holiday season with how the whole market was more festive, more crowded.” Traditionally families will purchase a goat or other livestock to sacrifice on that day, which is then portioned between the family, neighbors, and the poor and needy.

As for holidays back home, it was a little hard to be away for Thanksgiving. “I really missed my mom’s cooking! In the week leading up to Thanksgiving I was trying so hard not think about her stuffing. But we were so lucky—Syed Babar Ali, the founder of LUMS, didn’t want us to miss out on the holiday. Since Thursday was just a normal class day with homework and tutorials we did it on that Friday, but we had these exquisite turkeys that Babar Ali had ordered specially for us. They were delivered on a bed of French fries, which was to try to make them ‘more American.’ And then a good friend of mine hunted all over the city for ingredients so she could make a stuffing, which was just delicious.”

Due to security concerns, the students’ movements were somewhat limited and for the most part they weren’t allowed to travel outside of Lahore. But when there were exceptions, they were quite memorable. “Every day at sundown there is a ceremony at the Atari-Wagah Border between India and Pakistan. It’s a huge event and tourists come from all over to watch it, wave flags, and support their country. A couple of years ago I had seen it from the Indian side, and I remember standing on my tiptoes trying to see as much of Pakistan as I could through the gates. It was really important to me that I be able to experience this event from both sides, and so I was so grateful when we were able to go.”

The Berkeley - AIPS Urdu Language Program was launched in LUMS on August 27, 2014. This is an intensive Urdu Language Program for graduate students from the USA. It is jointly administered by the America Institute of Pakistan Studies (AIPS) and the Institute of South Asia Studies (ISAS) at the University of California at Berkeley and is based in LUMS, supported and facilitated by the Gurmani Centre for Languages and Literature. Six students this year are enrolled in the programme from across various universities in the USA. This intensive Urdu Language immersion programme will equip them for conducting research in their own areas of study, that range from Political and Military History to Art History and Film and Media from the South Asian region.

The launch was very well attended. Faculty from the Social Sciences Department, the Dean of MGSHSS, Professor Anjum Altaf, the Vice Chancellor, Professor Sohail Naqvi and Syed Babar Ali were present at the event. The students, faculty and coordinator of the programme were introduced. The students, who are already familiar with the Urdu language, spoke about their interests and their research areas. Speaking on the occasion, Syed Babar Ali welcomed the guest students and their faculty, expressed his good wishes for them and said that the revival of the programme in Pakistan was a very heartening development.

Dr. Munis Faruqui from UC-Berkeley was also present, who with Dr. Kamran Asdar Ali from UT-Austin and the team at LUMS has been instrumental in bringing this programme to Pakistan. Dr. Munis Faruqui also spoke on the occasion and thanked Dean Anjum Altaf and the Gurmani Centre faculty for hosting the programme and organising it so well.

A post about the BULPIP-AIPS Program from Spotlight on Cooperation, a blog by Kabir Altaf.

Kabir works at the Convergence Center for Policy Resolution, a nonprofit that convenes people and groups with conflicting views to build trust, identify solutions, and form alliances for action on critical national issues. One of their projects is the U.S.-Pakistan Leaders Forum, which aims to build civil society partnerships between the two countries. As part of this project, Kabir writes a blog entitled "Spotlight on Cooperation" which highlights individuals and institutions working to promote better relations between the US and Pakistan.

The application process is different for U.S. and Non-U.S. citizens.  Please click on the buttons below depending upon your nationality.