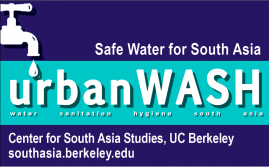 With the rapid pace of urbanization in South Asia, there is a critical need to improve not only the current inadequate water supply and sanitation services but also plan and meet future demand. As this demand increases at an accelerated pace, the issues to connect the supply and demand are being mired in various questions related to water availability, water quality, public health and hygiene, and cost-effective water provision and management.  urbanWASH is a recently launched initiative by ISAS designed to showcase various events and speakers focused on addressing the urgent need of urban water and sanitation issues in South Asia. UC Berkeley water specialist Prof. Isha Ray, is the lead faculty of this initiative.

Information Centers on Water and India

International Banks and their Water Initiatives