Sanskrit is the classical language of the Indian subcontinent. The oldest stage of the language is that of the Veda, the fundamental scriptures of Hinduism which date back to some twelve centuries BCE. The classical stage of the language, from some five centuries BCE onward, is the vehicle of a vast and varied literature from epics and poetry to Hindu, Buddhist, and Jain religious and philosophical texts, and scientific treatises on everything from astronomy and architecture to law and linguistics. Sanskrit was carried outside the Indian subcontinent to adjacent regions which came under the influence of Indian culture, Tibet and China, and Southeast Asia from Thailand to Indonesia. Hindu tradition heralds it as "the language of the gods." Today Sanskrit continues to be the primary language of Hindu rituals; traditional scholars, or pandits, still hold debates and write treatises in this medium; and poetry in Sanskrit continues to be cultivated. What ancient Greek has been for Greece and the Mediterranean world, and what Latin has been for Rome and Europe, Sanskrit has been for India and vast sections of Asia, but Sanskrit literature vastly exceeds Greek and Latin literatures combined, and with more enduring resonance today. In addition to being required to access this tremendous literature, a knowledge of Sanskrit is essential for comparative linguistics. Sanskrit represents one of the oldest branches of the family of languages known as Indo-European, which extend from India to Western Europe (and, with European expansion, to the New World).

Gifts in Support of Sanskrit Studies

Sanskrit is the heart and soul of traditional Indian civilization and culture, and Berkeley has a long and proud tradition in Sanskrit studies dating back to the 1890s. Supporting our Sanskrit Studies program ensures that it will continue to produce groundbreaking research and offer stellar language instruction to both undergraduates as well as PhD students. Community support also helps protect a much larger ecosystem of Sanskrit-based learning that benefits Jain Studies, Buddhist Studies and Southeast Asian Studies programs at UC Berkeley. Two major gifts in support of Sanskrit Studies are: 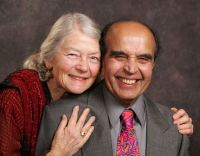 UC Berkeley alumni Raj and Helen Desai (image on right) want to preserve that tradition so that students can have the opportunity to study Sanskrit. To do this, they have established Samskrtaparmpara: The Berkeley Sanskrit Studies Fund in order provide for the growth and continuance of teaching and research in and on the Sanskrit language and literature for the benefit of future generations of students.

The Inder Dosanjh Gift in support of Sanskrit Studies

Many thanks to Inder Dosanjh and Consulate General of India, San Francisco for their generous support of the Sanskrit Studies program at UC Berkeley.

Mr Dosanjh is the President of California Automotive Retailing Group Inc. and owns 16 franchises retailing over 2,500 units per month. Mr. Dosanjh started his automotive career as a mechanic at a Saturn dealership in 1978 and worked his way up to becoming the General Manager and partner. He is currently also serving as a board member of the New Motor Vehicle Board (California), He was appointed by Governor Gavin Newsom in June 2019, and is a member of the Board’s Policy and Procedure Committee and a member of the Ad Hoc Committee on Equity, Justice and Inclusion. Mr. Dosanjh’s term expired in January 2021 and he is currently serving under a one -year grace period.