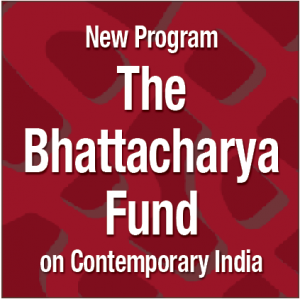 The Bhattacharya India Fund was established in 2016 with a generous contribution from Kimi and Shankar Bhattacharya, both long time supporters of Bangla Studies at UC Berkeley as well as of the Institute. The fund provides financial support for two programs:

The Bhattacharya Graduate Fellowship will award graduate students competitive grants of up to $1000 for research travel to India and up to $500 for domestic conference travel for presentations on topics related to contemporary India. Graduate students find awards such as these critical to furthering their research agenda, building key academic and professional networks, and securing larger funding opportunities.

The Bhattacharya Lectureship on the Future of India will enhance UC Berkeley’s impressive strengths in contemporary South Asia Studies by making an impact on the way India is perceived and understood in the United States. This is a moment of profound importance in India as it stands at the cusp of two worlds – a democratic and modern world on the one hand and a backward-­‐looking, neo-­‐traditional world on the other. The annual lectureship will create a forum where prominent figures not only from the global academic community, but also from the world beyond academia, including journalists, artists, leaders of civil society, and business leaders, will share their ideas about where India is going economically, socially and politically, with Berkeley and the larger community.

These two programs will be encompassed under our larger vision of creating a Center for Research on Contemporary India under the umbrella of the ISAS. Building upon a powerful tradition of research and teaching on South Asia, we envision these programs as fostering academic activities related to the region, designed to encourage on-­‐going research and establish links between the scholarly communities in India and the University of California, Berkeley. With the support of the university and the Indo-­‐American community, our hope is that the larger Center for Research on Contemporary India will have the potential to become an important force in the efforts to build and strengthen democracy, economic prosperity, environmental sustainability, and social equity in India.

Our hope for this program is that it will result it:

Kimi and Shankar (MBA’ 75) Bhattacharya have been avid supporters of UC Berkeley and the Institute for South Asia Studies ever since they first met in Sproul Plaza in 1971.

Shankar was born in India and moved to the US after completing his undergrad in Engineering from IIT- Kharagpur. Kimi was born in the Fiji Islands where her grandparents had migrated to from India as indentured labor in the late 19th century. She came to the US as a young girl with her parents. She started her undergraduate studies at UC Berkeley but moved to San Francisco State to pursue a BA in Fine Arts.

Shankar is a retired utility executive and Kim is a retired school teacher and they are both long-time Oakland residents.

The Bhattacharyas strongly believe that the world’s oldest (USA) and largest (India) operating democracies have much to learn from each other. The Bhattacharya India Fund is a small resource towards promoting that goal.