India is unique in history in having a sustained democracy in a poor country with a multi-ethnic, multi-cultural society. Today, its economic strength is also widely recognized and celebrated. While India’s power as an emerging economy is being celebrated and analyzed, equal weight must be given to its democratic institutions, without which India’s economic, social and human potential will remain unfulfilled. Thus the role democratic processes play in the sustenance and diffusion of this economic strength into the wider reaches of Indian society is a central question that must be engaged as we look toward the future. In order to create an environment in which such crucial questions can be discussed and alternative solutions offered by policy makers, thought leaders, NGO activists, and scholars, the Center for South Asia Studies at the University of California, Berkeley, together with the Foundation for Democratic Rights in India, has instituted a high-level annual seminar series hosted on the Berkeley campus.

The first in a series of annual seminars on Indian democracy was held at Berkeley on May 24-25, 2007 and attended by a host of Indian dignitaries, including Union ministers, Mani Shankar Aiyar, Jaipal Reddy, former Chief Minister of MP Digvijay Singh, Kerala finance minister Thomas Isaac, Infosys CEO Kris Gopalakrishnan, well-known media personalities Chandan Mitra and Kalpana Sharma, NGO activists Arvind Kejriwal, Ramesh Ramanathan and Jayaprakash Narayan, constitutional lawyer Rajiv Dhavan, as well as prominent Berkeley academics. In addition to noting the sheer magnitude of what India had managed to achieve and sustain regarding development of democratic institutions, local governance and empowerment, the conference highlighted the obstacles that stood in the way of achieving higher levels of accountability, lower levels of corruption and more effective governance, as well as broader challenges facing Indian democracy.  In particular, the role of Center-state relations and fiscal constraints on devolution, as well as the strains brought about by increasing inequality, were noted by participants.

Second seminar: Justice and the Law

Our second seminar is on the role of law in Indian democracy.

Introductory Session - Framing the Issues
Without mechanisms in place to ensure safety, justice and certainty, a democracy cannot survive. This panel will provide a brief introduction to the interrelatedness between Democracy and law in India today.

Session Two: Instruments of Law- The Judiciary
India has had an independent judiciary for decades, but how effectively does it function and is it able to truly deliver impartial justice to its citizens?  The panel will provide both an overview of judicial functioning in India as well as highlight specific cases.
Moderator: TBD

Session Three: Instruments of Law- The Police and Army
What is the role of law enforcement in a democracy?  How do state actors such as the police and army function to uphold the law? What recourse is available when these instruments of the state themselves break the law?
Moderator: Professor Lawrence Cohen

Session Four: Alternative Institutions of the Law
What alternative mechanisms are available for dispensing justice and insuring fairness?  In this panel we consider regulatory commissions and people’s courts as examples of such mechanisms.   What lessons can we learn from successful examples of effective and democratic legal environments?
Moderator: Dr. Sanchita Saxena

Session Five: Human Rights
How do human rights violations occur in a democracy?  What is the recourse when such violations occur?  Civil society, like citizens groups and even the private sector, are often involved in promoting justice and just practices. How does civil society work with the average citizen when he or she does not feel that justice has been served?
Moderator: Professor Ananya Roy

Session Six: Case Study of Chhatisgarh
The case of Salwa Judum in Chhatisgarh is notable in that Salwa Judum is a group encouraged and armed by the state.  What is the consequence of such state actions?
Moderator: Professor Pradeep Chhibber

The primary objective of these seminars is to provide direction and reflection on key issues that may challenge the democratic institutions of India in the 21st century. The aim is to generate ideas that will not only spur greater understanding of complex issues, but can also be implemented in terms of policy. The pace with which changes are taking place in India makes such a seminar series imperative. The ability to have conversations across disciplines and professions will, we expect, greatly enhance the ability to create innovate solutions and out-of-the-box thinking. These seminars will address these vital questions with the goal of critically evaluating existing projects, generating new ideas, and analyzing the feasibility of alternative models of local governance. In addition to the panel sessions, several high-profile keynote speakers will share their insights, and the seminar will conclude with an extended closed session to enable all of the invited participants, including major Indian politicians, to freely exchange views and formulate innovative policy suggestions.  We will also have smaller breakout sessions throughout the conference, which will allow smaller groups to discuss and reflect on the ideas that have been generated.

The first conference on governance and empowerment generated quite a bit of excitement both here at Berkeley and in India. As a result of this first successful meeting, we are working closely with Union Minister Mani Shankar Aiyar to hold a counterpart conference in India every year. In addition, we have established a partnership with Lokniti (the research arm of the Centre for Developing Societies in New Delhi) to rank Indian states on a set of governance and empowerment indicators. Finally, we are developing a publication series that will focus on each year’s theme, as well as a web portal on Indian democracy that will be linked from the CSAS website. We encourage conference attendees to carry ideas back with them to incorporate into their scholarly and popular writings and talks, and into relevant policymaking forums. We believe that participants and attendees will benefit from this opportunity to engage in broad discussions with leaders from other sectors, and we hope they establish connections that will lead to important collaborations in the future.

Center for South Asia Studies, University of California, Berkeley
The Center for South Asia Studies (CSAS) supports teaching, research, and outreach activities relating to South Asia at UC Berkeley. The only US Department of Education-funded National Resource Center for South Asia in California, CSAS is committed to enhancing knowledge of the region among students, academics, and the public at large. UC Berkeley has been a premier site for the study of South Asia in general, and India in particular, for the past century (Sanskrit courses date back to 1906). With over 40 faculty members conducting research in the area of South Asia studies, Berkeley offers 85 to 120 courses with significant India content every semester, and instruction in over six Indian languages. The University of California, Berkeley, is recognized as one of the top universities in the United States and was recently ranked as the second greatest university in the world by the Times Higher Education Supplement.

Foundation for Democratic Reforms in India
The Foundation for Democratic Reforms in India (FDRI) is a US based non-profit organization dedicated to the study of the democratic and constitutional institutions of India, and evaluation and promotion of reforms of these institutions. FDRI believes that key reforms in the Indian governance structure can afford all citizens the opportunity to reach their full potential and lead to a renaissance of the Indian Republic, making it a confident, prosperous leader in the global arena.
Until recently, FDRI was aligned with Dr. Jayaprakash Narayan's Lok Satta grassroots movement in India, which has done pioneering work in mobilizing grassroots support for political and democratic reforms, from listing candidates' assets and criminal records, to judicial reforms, to the newly enacted Right to Information Act. However, since Dr. Narayan has decided to take his campaign directly into the political arena by establishing a political party, the Board of FDRI has decided that the cause for reforms can best be served by providing thought leadership in critical areas through an informed interaction of academia with political and other leaders. 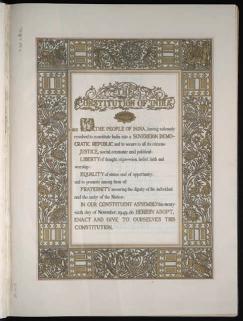