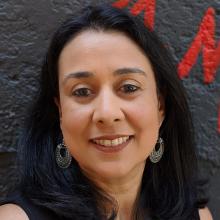 Dr. Sanchita Saxena (sanchitasaxena.com) is an administrator, author, researcher, consultant, and lecturer with a focus on international development and policy making. Dr. Saxena received her Ph.D. in Political Science (focus on Comparative Political Economy) from UCLA in 2002.

Currently, she serves as the Executive Director of the Institute for South Asia Studies (ISAS) at UC Berkeley where she is responsible for spearheading new research initiatives, managing multi-year grants (from the Department of Education, Department of State, and Obama-Singh Knowledge Initiative), developing programmatic activities, securing funding opportunities through grants, individual, and corporate donors, establishing internal and external partnerships, administering fellowships, disseminating research through articles and reports, overseeing the Institute’s long term strategy, and providing the administrative leadership for the day-to-day operations of the Institute. Dr. Saxena also serves as the Director of the newly established Chowdhury Center for Bangladesh Studies where she is spearheading collaborations for faculty and students between UC Berkeley and universities, private companies, NGOs, and research organizations in Bangladesh.

Dr. Saxena is the author of Made in Bangladesh, Cambodia, and Sri Lanka: The Labor Behind the Global Garment and Textiles Industries (2014, Cambria Press). She has also published several policy and conference reports on the garments and textiles industry, policy reforms, urbanization, and governance and democracy.

Dr. Saxena has given invited lectures at several universities and institutions, including Georgetown University, Johns Hopkins University, Harvard University, the London School of Economics, the United States International Trade Commission, the Center for Global Development, the National University of Singapore and the United Nations in Geneva. Her commentaries have been featured in the New York Times, Economic and Political Weekly, Thomson Reuters, The Daily Star, and aired on Voice of America, LinkTV, KQED World, and KPFA.

Dr. Saxena was a practitioner resident at the Rockefeller Foundation's Bellagio Center in Italy during the summer of 2016 where she was working on a book about the impact of post-Rana Plaza interventions by Western brands (forthcoming Routledge, 2019). In the summers of 2010 and 2014, she was a Public Policy Fellow at the Woodrow Wilson International Center for Scholars in Washington D.C. Prior to joining ISAS, she was the Assistant Director of Economic Programs at the Asia Foundation, where she was responsible for implementing economic programs in 18 countries throughout Asia.