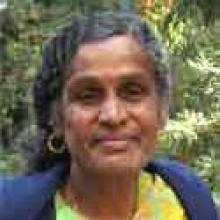 Kausalya Hart has prepared voluminous materials for learning Tamil and has written Tamil for Beginners, which is used at many universities and has been translated into several languages. She has also written several Tamil plays, which have been performed by Berkeley students, and has translated from premodern Tamil. In addition to all levels of Tamil, her teaching includes South Indian music and dance and culture. She has written papers on various aspects of Tamil literature, including the Tamil Ramayana and early Christian literature.