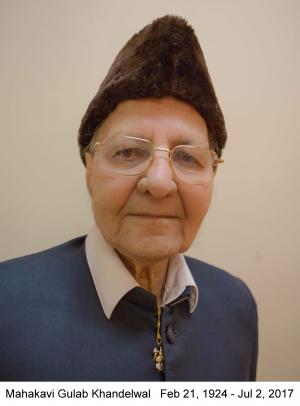 Gulab Khandelwal was an Indian poet who wrote poetry in different forms -- including sonnets, rubais (quatrains), dohas (couplets), odes,elegies, lyrical ballads, epics, poetic dramas, ghazals and masnavi -- with equal felicity. He even introduced some of these forms into Hindi literature and, apart from Hindi, has also written poetry in Urdu and English. The span of his poetic language touches upon Sanskrit on one end and Urdu on the other.

Gulab Khandelwal was born in the town of Navalgarh, Rajasthan (India). He spent his childhood and received his early education in Gaya, Bihar. He received his undergraduate education at the Banaras Hindu University, graduating with a BA in 1943. While in Banaras, he came into contact with the great luminaries of Hindi literature including Suryakant Tripathi 'Nirala', Maithili Sharan Gupt, Ayodhya Prasad Upadhyay 'Hariaudh', Harivansh Rai Bachchan and Bedhab Banarasi. He also met critics such as Pt. Ramchandra Shukla, Nand Dulare Bajpai and Pt. ShriNarayan Chaturvedi. Further early influences include scholars such as Dr. Sampurnanand, Kamlapati Tripathi, and Sitaram Chaturvedi.

Gulab Khandelwal started writing poetry at an early age. His first volume of poems was published in 1941 with a preface by Suryakant Tripathi 'Nirala'. Over the course of his life, he published 73 books, including more than 50 volumes of poems and 2 dramatic works in prose. Some of these have been digitized by the Digital Library of India. Six of his books received awards from the Uttar Pradesh government and one received an award from the Bihar government. Some of his books were selected as textbooks for colleges in Uttar Pradesh and Bihar, with Alok Vritt used in the Intermediate Board in Uttar Pradesh since 1976.

Mahakavi Gulab translated some of his poems in English in Gulab Khandelwal: Selected Poems, which was published in 1986 with a preface by Dr. Karan Singh, former governor of Kashmir. In recognition of this and his achievements over a long literary career, he was awarded honorary citizenship by the city of Baltimore on 13th July, 1985. Furthermore, both the mayor of Baltimore and the governor of Maryland declared this day "Hindi Day".

Mahakavi Gulab lived mostly in the USA but visited India every year. Until his death, he was active in his literary pursuits. In addition to his involvement in Indian literary organizations, he also worked extensively with Indian organizations in the United States. He presided over Vishwa Hindi Sammelan (an organization which strives towards the firm establishment of the Hindi language) in New York. At the age of 82, he wrote his auto-biography ज़िन्दगी है कोई किताब नहीं (Zindagi Hai Koi Kitaab Nahi).

More on him HERE.

All text and poetry provided by the Khandelwal Family.