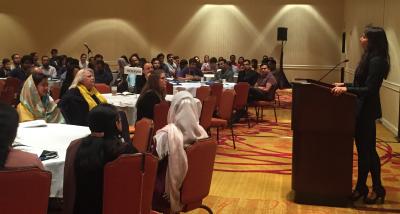 In April 2017, for the second year running, the Institute for South Asia Studies at UC Berkeley was awarded a grant from the Institute of International Education (IIE) and the Department of State's Bureau of Educational and Cultural Affairs to host the Fulbright Pakistan Social Entrepreneurship and Re-entry Seminar, a seminar designed to prepare Pakistani Fulbright Fellowship awardees for their return home and to introduce them to the field of social enterprise. Organized at the Oakland Mariott Hotel, between April 27 and May 1, 2017, this 4-day seminar welcomed 144 students representing a diverse range of disciplines at different academic institutions across the US to the Bay Area.

The opening session began with welcoming remarks by Prof. Munis Faruqui (co-Chair of the Berkeley Pakistan Initiative), Stephanie Reed (Fulbright Program Officer at the U.S. Department of State), and Ambassador Abdul Jabbar Memon (Consul General of Pakistan, Los Angeles). All three congratulated the students on the completion of their Fulbright programs and reminded the students of the immense impact that they could make in Pakistan because of this program. The keynote was delivered by Amra Tareen, founder of LittleCast and the President of Organization of Pakistani Entrepreneurs (OPEN) Silicon Valley. Speaking from her own experience in enterprise, Ms. Tareen delivered an inspiring lecture and encouraged the students to use their passions and interests to contribute to Pakistan.

Following a successful opening dinner, the students were connected the next day via Skype to several Pakistani Fulbright alumni. This virtual alumni panel provided the students with an opportunity to hear how the alumni used their degrees to further their professional careers and how they navigated their return to Pakistan. Present for the session was Fulbright alumni and subsequent successful social entrepreneur, Dr. Bushra Rahim. Dr. Bushra Rahim spoke about her social enterprise, Development Agent for Change, which focuses on alleviating the state of education for girls in the Khyber Pakhtunkhwa region.The students then participated in a session on social enterprise. George Scharffenberger from UC Berkeley provided an introduction to the field of social enterprise, and Stuart James, Executive Director of the Center for Independent Living, spoke about his experiences working on disability rights from a social entrepreneur’s perspective.

The post lunch sessions on the second day of the seminar took place in UC Berkeley. The first, "Map Vest: My Power, Your Power," which was led by Assistant Dean of the Goldman School of Public Policy, Sudha Shetty, showed the students how to leverage their existing skillsets for starting a social enterprise, fund-raising, or lobbying for legislation. It prepared the students to begin thinking about how they could all become social entrepreneurs by using their existing talents. The Re-entry Aspect of the program, following lunch, was planned in conjunction with Jason Patent and Lauren Moloney-Egnatios, both from the Center for Intercultural Leadership in UC Berkeley. The session provided students with strategies to integrate what they had learned in the US with their lives and future career decisions.

On the final day of the seminar, the Fulbrighters were invited to attend the OPEN SV 2017 Forum, an annual forum held by the Silicon Valley chapter of OPEN. They were able to listen to successful entrepreneurs on topics ranging from Google's cloud managing and virtual gaming systems to combating Islamophobia and fake news. The forum provided the students with unparalleled networking opportunities. At the end of the day, all students came together at the Oakland Marriott for the final closing dinner. UC Berkeley alum and social entrepreneur, Asim Fayaz, led a debrief session for the students to reflect on their time at OPEN. Lawrence Cohen, Director of the Institute made the closing remarks.

This seminar was an incredible opportunity for the Institute to both strengthen existing connections as well as expand its network to incorporate a brilliant group of Pakistani students. We look forward to hosting this seminar again in 2019 and to working with the IIE and Department of State's Bureau of Educational & Cultural Affairs.