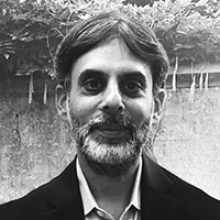 Adnan Malik is originally from Lahore, Pakistan. He came to the U.S. for undergraduate studies in engineering, but changed fields and got a B.A. in Sociology from Ohio Wesleyan University. He went on to get an M.A. in Sociology from the University of Chicago, and it was there that he started working in the library on the South Asia Microfilm Project. He finally decided to become a full-time librarian and became the South Asia curator at Cornell University Library in 2003. Two years later, in 2005, he joined UC Berkeley as South Asia Curator and Cataloger of the South Asian Collections at the South and Southeast Asian Library.