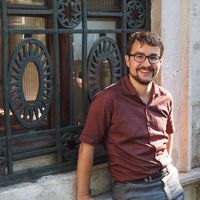 Dissertation Title: “Relocating the Centers of Shīʿī Islam: Religious Authority, Sectarianism, and the Limits of the Transnational in Colonial India and Pakistan”

Dissertation Abstract: This dissertation rethinks the common center-periphery perspective which frames the Middle East as the seat of authoritative religious reasoning vis-à-vis a marginal South Asian Islam. Drawing on 15 months of archival research and interviews conducted in Pakistan, India, Iran, Iraq, and the United Kingdom, I demonstrate how Shīʿī and Sunnī religious scholars (ʿulamāʾ) in colonial India and Pakistan negotiate a complex web of closeness and distance that connects them to eminent Muslim jurists residing in the Arab lands and Iran. The project attempts to move beyond scholarly paradigms that investigate the transnational travel of ideas in terms of either resistance and rejection or wholesale adoption. Rather, I show how local South Asian scholars occupy a creative and at times disruptive role as brokers, translators, and self-confident pioneers of modern and contemporary Islamic thought. Read the whole abstract here.

Relying on unexplored sources such as periodicals, pamphlets, organizational proceedings, travelogues, scholarly monographs, and video recordings in Urdu, Arabic, and Persian, the dissertation examines these dynamics through the lenses of sectarianism, reform, and religious authority. It demonstrates how Indian Shīʿīs already in the 1940s were haunted by the specter of Pakistan as a potentially oppressive Sunnī state. Shīʿī authors, intellectuals, and ʿulamā referred to widespread Sunnī-Shīʿī riots during the 1930s as an ominous foreshadowing of what Pakistan might entail for their community. They pointed to calls by Deobandī scholars and Muslim League members to implement an Islamic system in Pakistan built exclusively on 1 Ḥanafī law. This unresolved conflict resurfaced in the wake of the Iranian Revolution of 1979. Khomeini's model of the Rule of the Jurisprudent led sectarian Deobandī jurists to abandon earlier polemical approaches that focused mostly on doctrinal aspects such as the supposed Shīʿī belief in the corruption of the Qurʾānic text (taḥrīf). Instead, scholars affiliated with the Sipāh-i Ṣaḥābah-i Pākistān (The Army of the Companions of the Prophet, SSP) started to frame Shīʿīs as detrimental to their vision of creating a model Sunnī Islamic polity which was meant to fulfil the promise of Pakistan on a global level. They offered a striking re-reading of the Qurʾān and the Muslim tradition of the Subcontinent in order to raise the standing of the ṣaḥāba. Yet, in formulating their answer to Khomeini, these sectarian Sunnī ʿulamāʾ attempted to reclaim the caliphate as a divinely-sanctioned office that strikingly resembled and transcended Iran's model of government.

In the context of internal Shīʿī debates and the struggle over the definitions of orthodoxy, I pay close attention to modernist challenges in the late colonial period to the Shīʿī clerical establishment of Lucknow, then India's unrivaled center of Shīʿī scholarship. Building on this public contestation, I discuss how after the partition of the Subcontinent in 1947 both reformist ʿulamāʾ and their traditionalist, esoteric critics sought to appropriate the authority of leading Iranian and Iraqi Ayatollahs in order to emphasize their faithfulness to the Shīʿī mainstream and tradition. The two camps advanced their own, diverging visions of how to achieve a rapprochement with the Sunnī majority by either proposing a law-based and political redefinition of Shīʿī identity or by formulating a Ṣūfī-Shīʿī synthesis. Positioning myself against a reformist bias in existing scholarship, I make the case that the Shīʿī traditionalists defended a coherent and transcendent vision of God that incorporated important impulses from Ismāʿīlī cosmology.

The issue of religious authority also plays a central role during the succession struggle after the death of a major “Source of Emulation” (marjaʿ al-taqlīd) whose legal rulings lay Shīʿīs are supposed to follow in their daily conduct. My findings question the view of Pakistan as a mere Shīʿī “backwater,” where even fundamental religious concepts have not yet taken root, by focusing on the intensive discussions on the subject in the 20th century. In particular, I am interested in exploring how the leading Grand Ayatollahs, residing mostly in Najaf and Qum, attempted to influence the debate about who should be recognized in Pakistan as the preeminent global scholar and how these claims to authority were received and reinterpreted in the country. In this context, I highlight the ability of Pakistani scholars to acquire religious clout during periods of uncertainty when a towering scholar has not yet emerged and discuss the strategies which they pursued in order to redefine their relationship to the West Asian “centers.” Similar agency is reflected in the unique ways in which Pakistan's Shīʿīs gradually made sense of the Iranian Revolution and how they filtered its transnational implications through the prism of their local religious needs. I argue that for the first years after the political change in Iran, Pakistani Shīʿī ʿulamā remained primarily occupied with domestic events. Even ardent supporters of Khomeini were not sure what his authority should mean for them outside of Iran. A lack of both available literature and direct contacts with the neighboring country led these actors to make sense of the Revolution in familiar South Asian terms like non-violence or the concept of the “renewer of religion” (mujaddid). A second step in the reception can be discerned with the rise of the young cleric Sayyid ʿĀrif Ḥusayn al-Ḥusaynī to the helm of Pakistan's most influential Shīʿī organization at the time, the Movement for the Implementation of Jaʿfarī Law, in 1984. Ḥusaynī, who had studied briefly in Iran, clearly and consistently drew on the hallmark themes of the Iranian Revolution. Yet, in doing so, he was often forced to bend aspects of the revolutionary message, like Muslim unity or the leadership of the clerics, to his Pakistani context. I also pay attention to the unprecedented embrace of Iranian ideas that is 3 anchored in present-day Lahore.

Despite their high visibility in society and their substantial size as the second largest Shīʿī community worldwide after that of Iran, Pakistan's Shīʿīs and their intellectual production have hardly been studied in the existing literature. This dissertation in its transnational scope speaks to historians of South Asia, the Middle East, and Islam, as well as to scholars working in the fields of Islamic thought, transnational history, Shīʿī studies, and religion more broadly.